#1 eCommerce Website Builder. Read on and Find Out Why...

If choosing the right website builder is tough, choosing the right eCommerce website builder is even more tough. While there are a whole lot of parameters to take into account when choosing a website builder, obviously an eCommerce system has many more variables to consider. You need to make sure that you like the way the site looks, obviously. But when talking about an online store there are things like security, credit cards, commission, stock, stock management, site load speed (affects sales), newsletters, cart abandonment and many more features that need to be accounted for in eCommerce stores. When talking about eCommerce website builders, Shopify is absolutely the first website builder that comes to mind. Why is that? Why with so many eCommerce options out there is Shopify always at the top of the list? Let’s take a deeper look and find out why this Shopify review recommends Shopify so strongly.

Shopify is the Easiest to Use eCommerce Website Builder

Who is Shopify for?

Something that we should note is – Although Shopify is a great eCommerce platform, it’s mainly great for people that actually intend to build an eCommerce store. Unlike some other website builders like Wix or Weebly that have regular website or blog building capabilities as well as eCommerce, Shopify is focused primarily on eCommerce. They do have regular website building capabilities but if you don’t plan to build an online store, Shopify might be an overkill.

Shopify is mean for anyone that needs an eCommerce website and they are really good at what they do. Another type of client that Shopify attracts very well is dropshippers. The previous link explains all about Dropshipping and how it connects to Shopify.  In the following video you can see how to utilize Shopify’s platform for Dropshipping.

Try out Shopify for Dropshipping

The Shopify app store is one of the things that makes Shopify a great eCommerce website builder. Where a whole lot of website builders don’t have the ability to add code to enhance their existing functionality, Shopify created an API and allowed external programmers add their own code to Shopify websites. This is done with specific apps that are added to the Shopify App Store. You will be able to find thousands of “enhancements” to your Shopify online store. Literally anything you can think of.  Blow are some examples of apps you can find there is various categories.

Just like any other website builder and CMS, Shopify’s design is built on themes. Weird enough, at the time of writing this Shopify review there are only 61 themes, out of them 10 are free and the rest cost an average of $150. 61 themes is a bit low for a huge enterprise like Shopify. However, there are a whole lot of things you can do to enhance each theme so it doesn’t really matter which one you choose, there is a lot you can do to make it your own.

If you see a Shopify site that you like and want to figure out what theme he used, all you have to do is use a Shopify Theme Detector and find out.

An abandoned checkout is someone that clicked to add your product to his cart, started to fill out his information planning to purchase your product and then for whatever reason, he decided to quit. One of the first things that a user fills out is his email. So Shopify offering abandoned checkouts means that if your site has an abandoned checkout, he will be emailed a few hours after he decided to quit (or got distracted, or decided to wait for later) and be reminded that he never completed his purchase. He will be given a special link that will add all the products he added to his cart, so once he lands on your shopping cart page, all his products will be there waiting for him. All he has to do is add his credit card and pay.

Shopify’s pricing table is very easy to understand, the differences among other things are with the credit card rates, staff accounts, Shopify shipping discount, gift cards, reports, abandoned cart and more. The one great thing here is that there is no difference with the bandwidth and storage like in other website builders we’ve reviewed here. 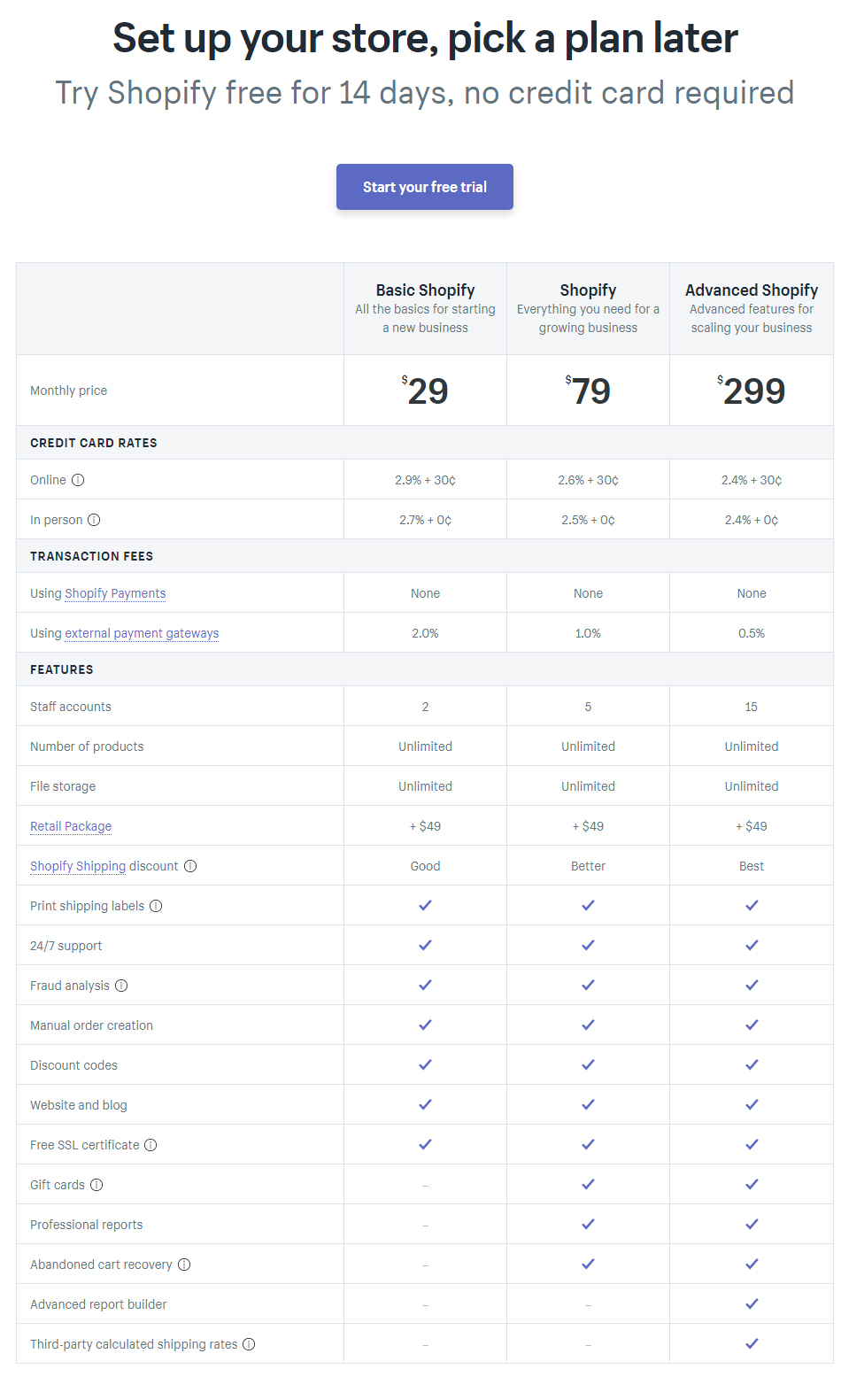 Overall, taking all the above into consideration, if you are planning on building an online eCommerce website, Shopify is definitely one of the best options out there, and as it seems it’s the best eCommerce website builder choice. So choose it with no hesitation.

Get updated once in a while about what's new in the industry, special deals and interesting CMS'.